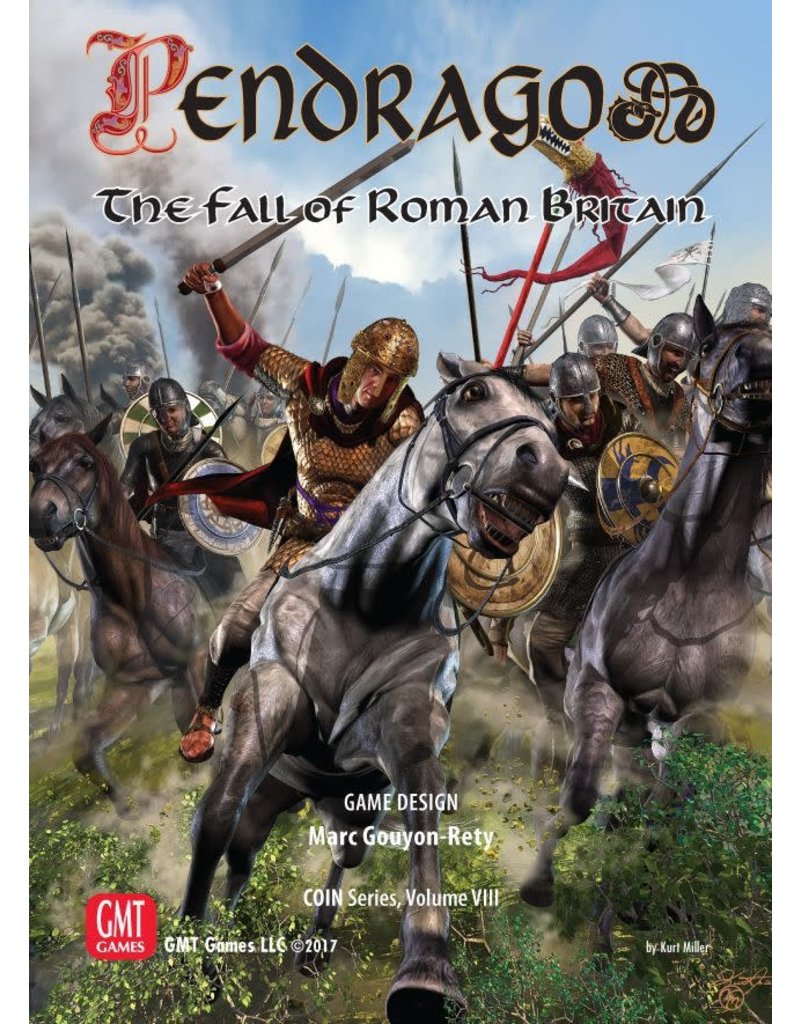 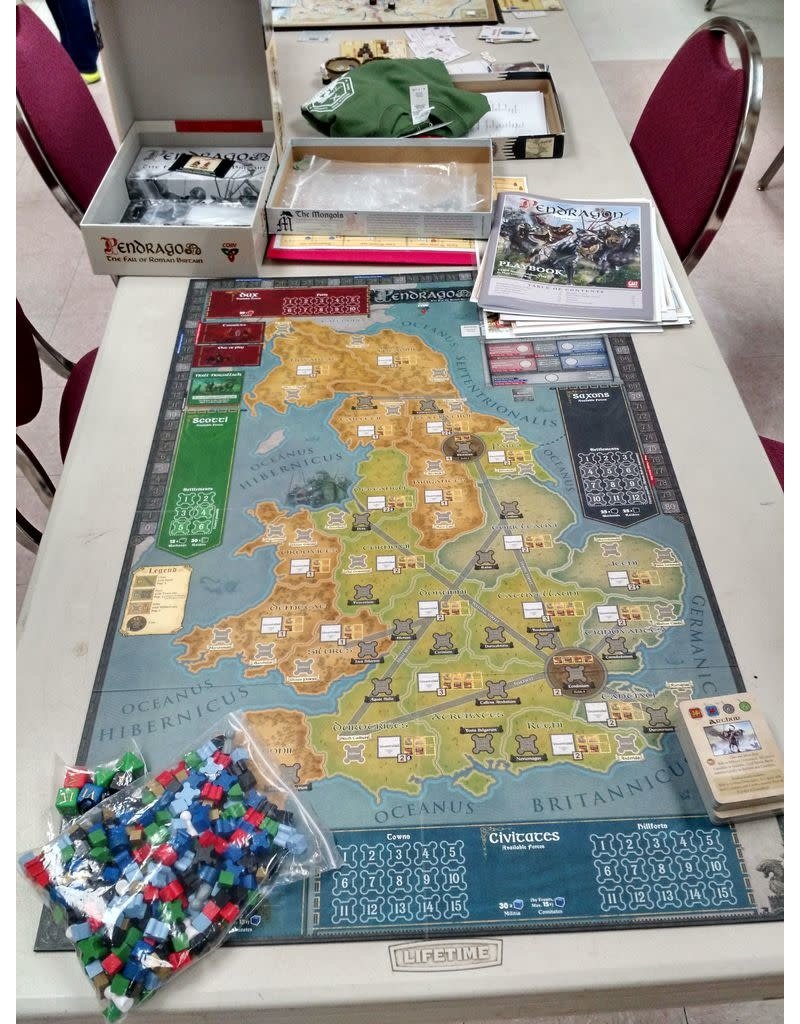 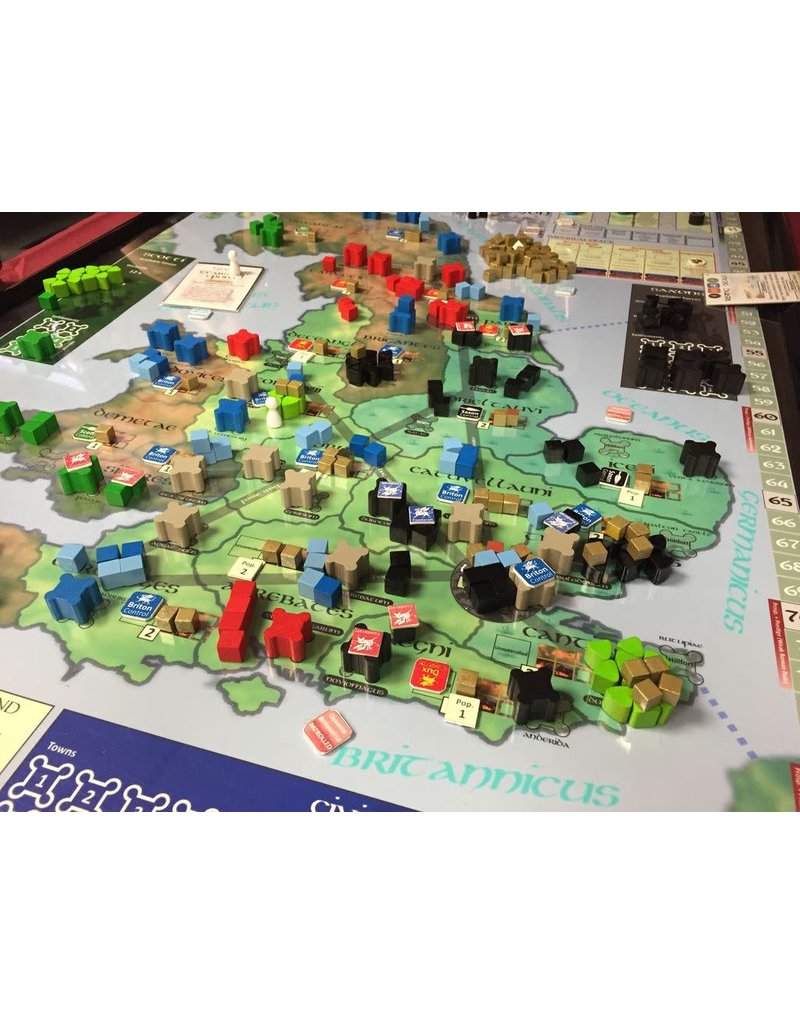 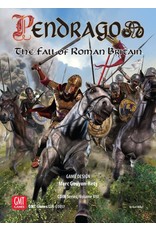 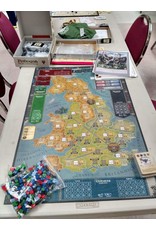 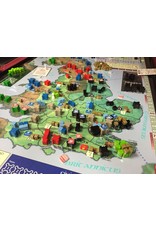 Volume VIII in GMT’s COIN Series transports us into the 4th and 5th Centuries A.D. and to the embattled Isle of Britannia. Pendragon – The Fall of Roman Britain covers a century of history from the first large-scale raids of Irish, Pict, and Saxon raiders, to the establishment of successor kingdoms, both Celtic and Germanic. This sumptuous volume adapts the celebrated asymmetrical COIN engine to depict the political, military, religious, and economic struggles of Dark Ages Britain.

Pendragon leverages the tremendous flexibility of the COIN system, from dual events to dissimilar approaches and victory conditions, to capture the complexity of the period and let the players explore alternative narratives. Unlike earlier volumes, Pendragon is not about counterinsurgency per se, but focuses on the asymmetrical clashes between and among Romano-British authorities and Barbarian powers gnashing over the carcass of the Roman Empire, including:

Barbarian Raiders plundering the land and trying to surprise unwary towns and hillforts, then melting into hills or fens.
Expansion or decline of the Saxon Shore naval defense system to counter sea-borne raiders.
Authentic Late-Roman military doctrine—mighty but hard-to-replace cavalry tracking down raiding parties before they can return their booty home.
Accessible, powerful but fickle Foederati: barbarian warbands in Briton employ.
Nuanced battle system representing troop qualities and tactics.
Fortified strongholds that must be assaulted, besieged, or rebuilt to gain regional political control.
Civil wars, coups, religious shifts, and cultural assimilation.
Population movements over the generations, due to good administration, barbarian ravages, or climatic changes.
Epochal Events ranging from Roman usurpations on the continent to massive reprisals against barbarian homelands.
Evolution of rules and victory conditions throughout the game, as the still vivacious Roman Empire may or may not end with Britain fragmented among competing semi-barbarian proto-kingdoms.
A deck of 83 cards with gorgeous commissioned original art.
Short, medium, and full-length scenarios
Support for solitaire, 2-player, 3-player and 4-player experiences.

Each faction in Pendragon brings specific capabilities and challenges:

The Dux represent the original Roman Army in Britannia: with the most powerful units in the game and a network of strong fortresses ringing the island and tied by efficient roads, you must strive to preserve the stability and prosperity of the provinces and punish any interloper daring to challenge the peace. If you can build up your prestige and maintain order, you may be able to keep the island in the Empire, or at least united in a new post-Roman power. You can rely on the civilian militia to assist you, but—as your peerless cavalry dwindles—you must resort to the traditional Roman offer to barbarians of land for service in your forces as Foederati. As the decay of institutions conspires with the scheming of feckless civilians and the marauding of restless barbarians, you may find that the dream of Empire is dead. If so, with your once proud Army little more than another group of warlords, you still can strive to carve for yourself the most powerful kingdom alongside your new rivals.

The Civitates represent the Romanized aristocracy ruling the ancient Celtic tribes from lavish villas and prosperous Roman towns, chafing under the distant authority (and taxes) of Rome, mistrusting the uncultured and semi-Barbarian army, and yearning to settle century-old accounts with their neighbors. When the Barbarian storm comes down upon your island, you may find yourself woefully unprepared to cope—materially or culturally—and presented with a fundamental choice: strive to protect your lands, wealth, and way of life via the despised Army and untrustworthy Foederati, or sacrifice Roman comforts to face down the Barbarian challenge militarily and culturally through a return to Celtic traditions.

The Saxons represent various Germanic groups including Angles, Jutes, Frisians, and Franks who harried, settled, and eventually took over swaths of Britain. As outsiders, you face a steep challenge just to come ashore against the might of the Roman army and navy. You will chip away at the Saxon Shore system, ravage the provincial economy to weaken the Britons’ capability to wage war, and see some of your best warriors serve as Foederati (often against yourself), but recognize that the more Saxons living on the island—whoever their paymaster—the more opportunities for advancing your nation. Eventually, you must secure footholds, perhaps in the marshy fens of the eastern seaboard that so resemble your homelands, in order to wield your considerable military potential and challenge the old masters of these rich lands to create England.

The Scotti, named for the marauding groups of Irish raiders, also represent those Celts native to the island of Britain who differed from the romanized Civitates by remaining true (or reverting back) to the old ways. Often, the boundary between the two groups was porous... The biggest such group eventually formed the northern nation of the Picts, forebears of modern Scotland. As the Scotti, you see the disintegration of Roman Britain as an opportunity not so much to expand as to seize riches and renown to assert yourself at home. Raid ceaselessly, surprise and plunder poorly protected communities, kidnap for ransom, and show your military prowess against your unfortunate neighbors across the Irish Sea and Forth-Clyde isthmus… Then establish bases strategically along the enemy shores and entreat local hill tribes to reject post-Roman authority. But beware that your very advances will help give rise and limit your ability to grapple new powerhouses on the island!