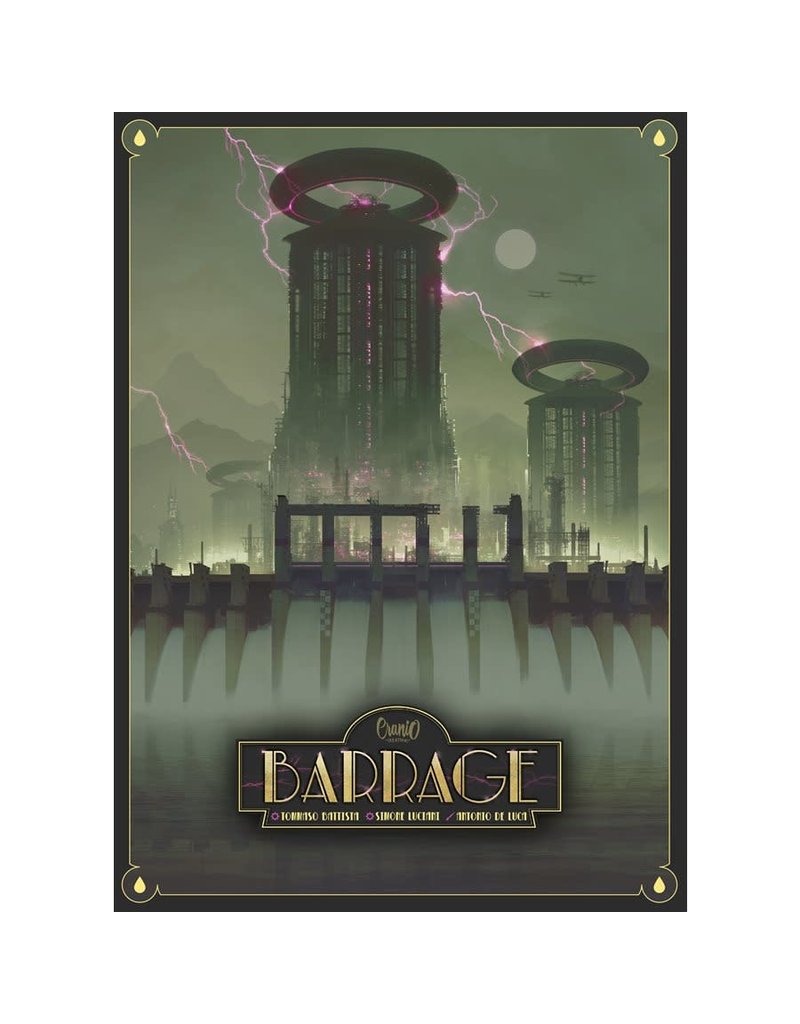 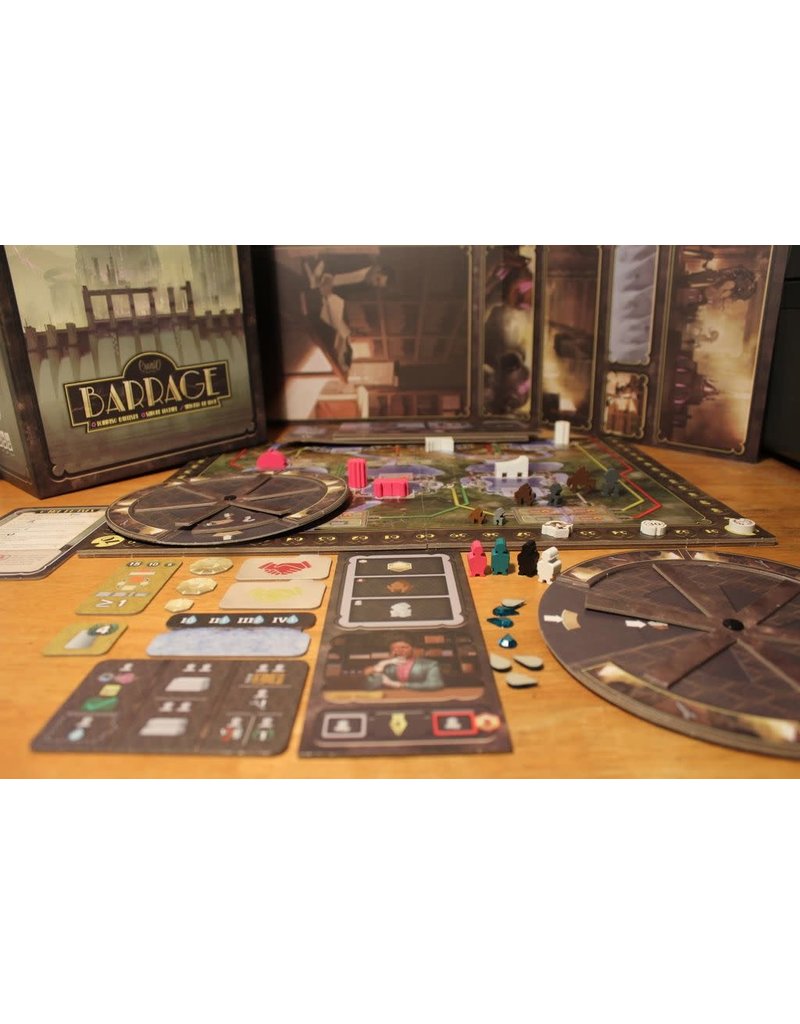 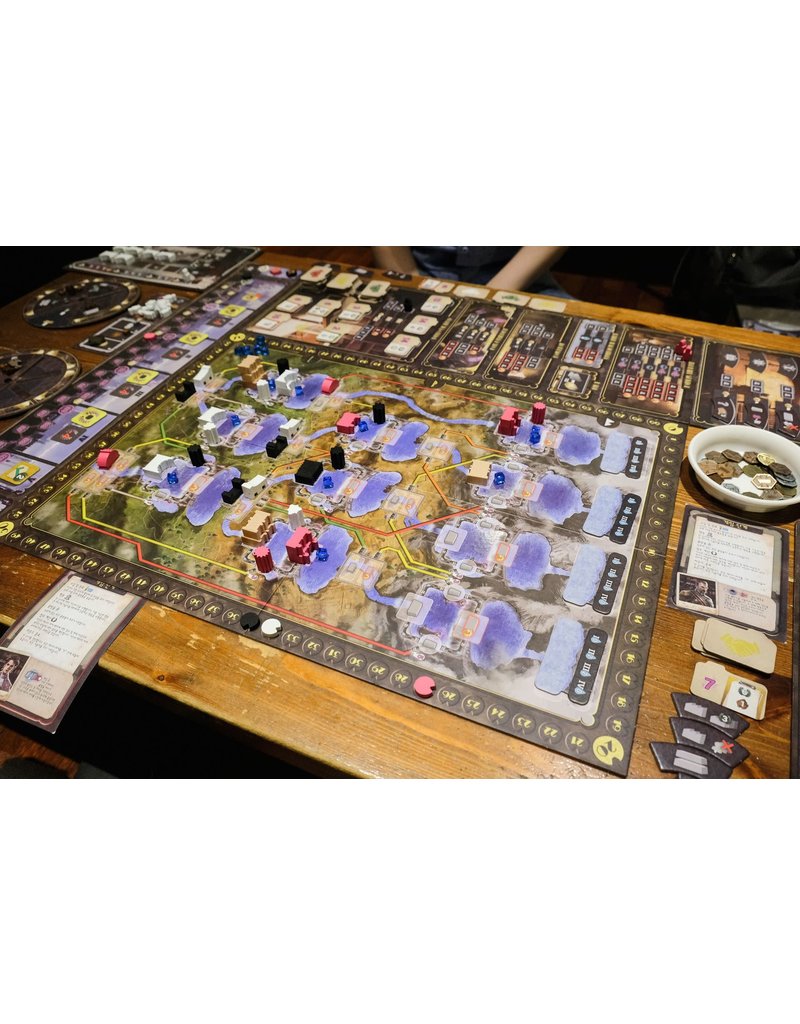 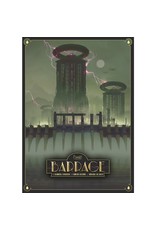 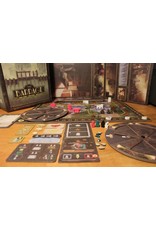 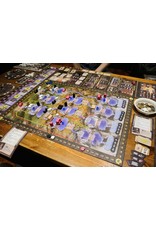 Release date: Ask us for the release date at info@societejeux.ca

In the dystopic 1930s, the industrial revolution pushed the exploitation of fossil-based resources to the limit, and now the only thing powerful enough to quench the thirst for power of the massive machines and of the unstoppable engineering progress is the unlimited hydroelectric energy provided by the rivers.

Barrage is a resource management strategic game in which players compete to build their majestic dams, raise them to increase their storing capacity, and deliver all the potential power through pressure tunnels connected to the energy turbines of their powerhouses.

Each player represents one of the four international companies who are gathering machinery, innovative patents and brilliant engineers to claim the best locations to collect and exploit the water of a contested Alpine region crossed by rivers.

Barrage includes two innovative and challenging mechanisms. First, the players must carefully plan their actions and handle their machinery, since both their action tokens and resources are stored on a Construction Wheel and will only be available after a full turn of the wheel. The better you manage your wheel, the earlier your resources and actions come back to you.

Second, the water flow on the rivers depicted on the board is a shared and contested resource. Players have to intercept and store as much of the water as they can, build dams (upstream dams are expensive but can block part of the water before it reaches the downstream dams), raise the dams to increase their capacity, and build long tunnels to channel the water to their powerhouses. Water is never consumed — its flow is just used to produce energy —, it is instead released back to the rivers, so you have to strategically place your dams to recover the water diverted by you and the other players.

Over five rounds, the players must fulfill power requirements represented by a common competitive power track and meet specific requests of personal contracts. At the same time, by placing a limited number of engineers, they attempt to enhance their machinery to acquire new and more efficient construction actions and to build and activate special unique-effect buildings to forward their own developing strategy. 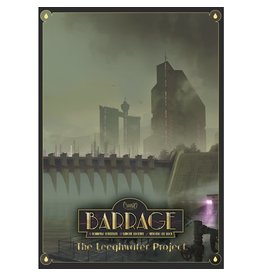 A new faction, the Netherlands, that uses Jan Leeghwater’s expertise in water management, adding even more water to your dams.

The External Works mechanic, a set of powerful tiles that can be obtained from a ne
Preorder
Barrage - Le Projet Leeghwater (FR) PRÉCOMMANDE
C$54.99
C$46.99